The mooching is still going on….just as I think I’m ploughing through it all…a whole load more appears …….!!!!

It is so easy to get distracted. For example…

I have come across these sewing needles and a few packets of old hook & eyes. Yet, as I hold each one to have a look, I can’t help but get caught up in the….’if you could only talk, what stories could you tell!’ syndrome.

PACKET FOLDS OVER ITSELF

ON THIS PACKET THERE IS NO COUNTRY OF ORIGIN AND OUT OF INTEREST I HAVE COME ACROSS THIS ARTICLE WHICH REFERENCES SUCH A BRAND OF NEEDLE…..

“…The following passage is from the November 18, 1899, issue of The Economist, and lends credence to this theory:

“A deputation of cravat manufacturers was received this week by the Minister of Commerce of make representations on the use of false trade-marks on importations of the articles they sell from Germany, Austria, Belgium and Italy. These goods, the deputation declared, are marked with the words ‘Made in London’ or other words imply that they are of English origin, which appears to be a recommendation with buyers … It is, however, a common practice to import German goods marked as English, and recently the attention of the British Chamber of Commerce was called to the sale, in France, of packets of needles bearing a portrait of the Queen, with the words ‘Prinzess Victoria Needles’ and the name of a fictitious manufacturer at Redditch. The spelling of the word princess betrayed the origin of the article, but would escape the attention of the buyer.”

‘ Registered in England No. 383343
Made in England.
Warranted rustless

Directions:- sew round the loop as shewn above.’

It has the doublehead swan trademark.

These are adorable and perfect for any collector. 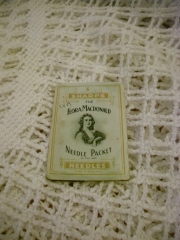 There are 10 needles in the packet,held in place on a piece of felt cloth.

1X SHARPS 7, FINEST QUALITY NICKEL PLATED NEEDLES
34 – ON BACK OF PACKET
MADE IN ENGLAND BY THE BRITISH NEEDLE COMPANY LTD REDDITCH
11 NEEDLES IN PACKET.

1X SHARPS 3-7 ,NICKEL PLATED NEEDLES,
27 – ON BACK OF PACKET.
MADE IN ENGLAND BY THE BRITISH NEEDLE COMPANY LTD REDDITCH
ON INSIDE OF CARD ‘EMBASSY NEEDLES ARE OBTAINABLE IN MANY DIFFERENT KINDS AND SIZES. THEIR LARGE EASILY THREADED EYES AND LONG TAPERED POINTS MAKE THEM A PLEASURE TO SEW WITH.’
7 NEEDLES IN PACKET

SO, IF ANYONE KNOWS ANYTHING ABOUT ABEL MORRALL,THE CLIVE WORKS FACTORY IN REDDITCH,THE MYSTERY GIRL AS PRINZESS VICTORIA AND WHO IS FLORA MACDONALD…..I WOULD LOVE TO HEAR ABOUT IT. 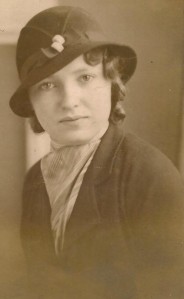